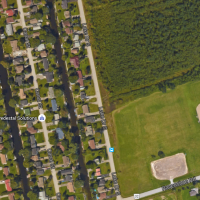 It will cost $15,000 right out of the gate to see if an estimated $7-million fix of the baseball diamonds at West Park in Keswick is an option.

That is because most of the park is in a flood plain and includes wetlands that are both under the jurisdiction of the Lake Simcoe Conservartion Authority.

Since extensive excavation, fill and drainage would be part of an overall full rebuild of the diamonds, which includes lighting and above-ground infrastructure, LSRCA approval is required.

As a result, council last week approved spending $15,000 to come up with a design for the park to submit to the conservation authority.

That breaks down between $8,000 for a design and $7,000 for a required topographical study.

The decision stemmed from discussions over the Multi Use Recreation Complex (MURC) and whether moving the West Park ball diamonds, which are in need of extensive rehabilitation due to historic flooding and drainage issues, should be added to the proposed MURC’s overall footprint.

“Unless we can’t get a permit, we need to make a decision,” Ward 1 councillor Naomi Davison said.

Mayor Margaret Quirk agreed, adding it will cost $15,000 to get that answer.

Ward 4 councillor Frank Sebo, however, had some “serious issues” over potentially spending “millions of dollars that could be better spent elsewhere” in the municipality, especially in light of the fact that the town’s total ‘revenue’ from ball diamonds amounts to $47,000 and that user groups could most likely carry on their schedules with the town’s remaining diamonds.

“I think we can get a way better bang for the buck than West Park’s particular basket,” he said.

The town’s director of recreation, Robin McDougall,  however, said the real “value” does not boil down to “dollars and sense” but rather the benefits of providing recreational opportunities promoting healthy, active living.

In addition, diamonds don’t have huge operational costs once they are up and running, she added.

In West Park’s case, whose ball diamonds were installed during the 1980s, $460,000 in basic repair and maintenance has been tracked by the recreation department up to 2003.

That is not a “full picture”, however, since that accounting does not include the past 14 years of totals, McDougall added.

Councillors Dave Neeson and Dan Fellini also wanted some assurances that any potential work undertaken would not “sink” five years from now in light of the nature of the property.

If the engineering is done right, it is going to last, according to the town’s director of engineering, Dan Pisani.

The first step in the future of the diamonds, however, will be whether or not the LSRCA approves the town’s design.