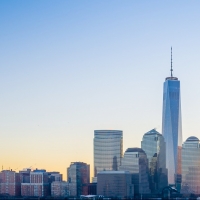 Is Toronto's obsession with the CN tower stifling condo supply?

The CN tower is Toronto's baby. It's our landmark and the face of our city. It may also have a role in Toronto's housing supply shortage by suppressing supertall development near it.

I remember distinctly during my time at Cornell's CIRECC event in New York City, both of the two tallest buildings in NYC were being built. Each of the developers were at the CIRECC event as judges, and in dialogue with the 432 Park developer, I learned that their site 432 Park Avenue was going to be the tallest building in the western hemisphere.

The next day, during a construction site visit at the New World Trade Center, I proudly dropped this little piece of trivia to its developer, who politely rebutted that One World Trade would be the tallest building in the Western Hemisphere. It actually ended up with a brief debate and a bunch of google-searching, the point of contention being that One World Trade was taller with the spire, and whether or not that qualifies. It's 417m without the spire. (Fun fact - the spire came from Quebec.)

Based on my conversation with each of these developers, it seemed it may have been the first time this competition arose. It actually developed into a bit more controversy later:

on November 12, 2013, the Height Committee of the Chicago-based Council on Tall Buildings and Urban Habitat (CTBUH) made the controversial announcement that One World Trade Center was the tallest building in the United States at 1,776 feet (541 m), declaring that the mast on top of the building is a spire since it is a permanent part of the building's architecture. By the same reasoning, the building was also the tallest in the Western Hemisphere.

Why does this matter? Well, from my perspective it matters because it demonstrates what's achievable in tall buildings and small footprints today. Although 432 Park does look pretty wild poking out so far above its neighbours, it is there, and it is occupied. The density environment around 1 WTC looks a little more deliberate and organized, with skyline tapering up towards it.

The CN tower is 553m tall. Our next tallest structures, in order, are:

No, I'm not joking. And it's being decommissioned, too. Maybe we can take Quadrangle's CN Tower parasitic apartment concept and deploy it on Canada's second-largest structure instead.

The One is the first of several buildings expected to past the 300-meter mark. Here's the weird part: we're racing to beat the 300-meter mark when other cities, with whom we compete, are regularly surpassing 400m. Presentation of this information begs the question - why aren't we taller in Toronto?T

To my understanding, and through a couple of google search results listed above, planning/zoning is the most discussed variable. My curiosity is what role, if any, the CN Tower and its skyline domination, play in built-form environment planning.

Let me be clear. I don't have an issue if it does play a role. I love the CN Tower. I am obsessed with concrete architecture, much to the annoyance of everyone. I love Toronto's skyline, and I love the CN Tower's role in Toronto's skyline. The CN Tower also serves a purpose. It's a great place for tourists to sightsee look at Toronto, eliminating the need for weird lineups in front of purposeful buildings that play a role in the local economy. It's a great place for dinners. It's a great thing for people from the 905 to take pictures of so their instragram followers know they were there. It's also a purpose-built telecommunications mast, and that's important.

The CN Tower has also lost some purpose. It lost it's stature as the tallest freestanding structure in the world when Dubai started outbuilding all our records with such laser precision it almost seemed vindictive. (They took our largest mall title from West Edmonton Mall, too.) It's likely not as useful as it once was as telecommunications mast. If still serving that purpose as immensely as it was purpose-built to, perhaps tall buildings would obstruct it.

Would it look that bad if the CN tower was surrounded by buildings that surpassed its observation deck? Is it so rude to surround the CN with a few competitors?

The economics of growing up

We often tout "land scarcity" as a big factor in Canada's affordable housing crisis. Coming from the second largest landmass in the world, that sounds pretty unreasonable at face value. Be mindful that it's easy to ignore host of city-building variables from infrastructure to capital flows, in that analysis. Regardless, increased density is a solution to land scarcity. Taller buildings mean increased density.

Reverse engineered, this means that excess demand causes price escalation. Excess demand can be addressed with increased supply. Even though tall buildings trade with higher prices, this creates capital mobility, moving excess demand for luxury product elsewhere, easing price-ceiling growth in other projects. This is sort-of the idea behind trickle-down housing economics.

New York City is a leader in real estate development density, and, this has honestly created a relative price accessibility from a housing perspective. New York is always described as expensive, but seldom described in the catastrophic affordability-crisis terminology Toronto is now accustomed to. New York has 273 skyscrapers. Toronto has 60.

There are many "perhaps" and "what if" scenarios available, but the question remains: if we are claiming housing is not affordable due to supply scarcity, and we have an empirically verifiable way to add more supply per-lot by increasing floor space index, why aren't we doing it? If condos are, in fact overpriced, and if luxury absorption is high, why aren't developers putting more on a lot? Are other factors getting in the way? Are they not allowed? Construction costs? Development charges?

The legislature of growing up

I admittedly don't really know as much as I want to about the soil and bedrock conditions in Toronto vs. NYC, but it could be a factor. If it is, I certainly couldn't find any information about it. (Another fun fact - the New York City skyline may parallel the bedrock depth of the Manhattan Schist bedrock, with bigger buildings being buildable on the areas where rock is thicker. There's a book about it, although, now up for debate.)

I also admittedly find it challenging to get a clear picture of Toronto's planning approvals process and the built-form planning environment evaluation process. That being said, there seems to be, at the very least, some consideration in that planning for Toronto's skyline, and the CN Tower's role within it.

I'm trying to give the benefit of the doubt to planning here, but it seems that we could really benefit from some supertall skyscrapers right about now. We currently have zero. The One will be our first of a few 300m supertalls.