Builder waiting since ’14 to open Hwy. 48 Tims in Mount Albert 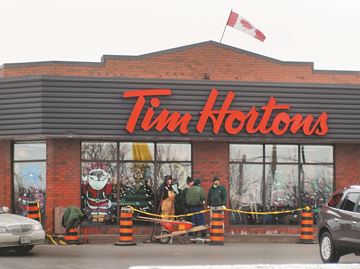 It’s no secret Mount Albert residents are hot to trot for a Tim Hortons to come to town.

What could be better than getting your double-double fix just minutes from your front door?

That dream can now be considered a distinct possibility. Oxford Developments would like to build a Tim Hortons and Esso gas station on Hwy. 48, just north of Mount Albert Road.

The developer, however, is having difficulties securing the proper variance from the Ministry of Transportation as the property fronts on to a provincial highway.

‘We have to overcome the issues of safety.’

“It has now been two years that we have been attempting to get an access permit by working with the MTO,” Oxford developments manager Stephen Meyer said.

Meyer came before East Gwillimbury council Tuesday to ask for a letter of support for the project. Oxford believes such a show of support might jolt the ministry into giving approval for the proposed road access.

Council was excited about the idea but didn’t want to offer its support without taking a serious look at the proposal first.

“Certainly no one here on council is more supportive of Tim Hortons than me,” Councillor Marlene Johnston said.

“But we have to overcome the issues of safety.”

At first glance, council was worried about how close the entrance would be to the Mount Albert Road/Hwy.48 intersection.

The town has been eyeing traffic safety concerns at the Tim Hortons at Green Lane and Leslie Street in Sharon for the past year, Mayor Virginia Hackson said.

“We do rely on traffic people, engineers and planners to give us the best advice,” she said.

Safety concerns are elevated in the area after a pedestrian was struck and killed last December on Hwy. 48, north of Princess Street.

Hackson said the town has to be careful when considering how close to place businesses to intersections.

The conceptual design of the development has the entrance at the north end of the property where there would be a stand alone Tim Hortons with a drive-thru.

The gas station and convenience store would be located on the southern portion of the property. The original plan had two driveways, which was amended to one, and Oxford has submitted a traffic impact study as part of the process.

Staff will report back to council next month about the project’s functionality.