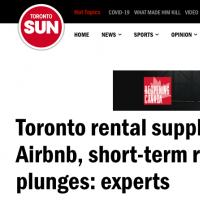 Not sure how much I agree with the narrative about the role of short-term rental demand and Airbnb regulations by the City of Toronto creating excess rental supply. I think it's one of many factors I'm outlining in today's "3-pointer" on my instragram story:

More rental units in Toronto are opening up as a result of the Airbnb market crashing. But that doesn't mean they are affordable to the majority of renters, according to the Advocacy Centre for Tenants Ontario.LIONEL BONAVENTURE / GETTY IMAGES

Toronto is seeing a bump in the number of apartments for rent after properties landlords used as Airbnb rentals have sat vacant for months during the pandemic.

Scott Ingram, a chartered accountant and realtor at Century 21, said, that based on what he’s seen on MLS — just one source for those looking for rentals as many also rely on Kijiji or Padmapper — Toronto’s rental supply is high right now.

“I don’t imagine there’s that big a demand for short-term rentals right now, with no international travel, and even interprovincial travel is disrupted,” he said.

“Who wants to climb into a metal tube and breathe recycled air for several hours right now? But maybe some Ontario road trippers want to come to Toronto? But all of the tourist stuff you’d want to do is restricted.”

Toronto banned Airbnb and short-term rentals in mid-April, but the province lifted those regulations on June 5.

Ingram said people trying to rent out multiple Airbnb as a business would likely have already attempted to fill their units, either by moving to the long term rental market as soon as their short-term rental revenue dropped to zero, or by opening up their Airbnb calendar the minute they were allowed to, if not before.

“But I would guess that people that rent out rooms in their own homes may be more skittish with respect to having strangers in their homes, especially anyone that’s just arrived from abroad,” he said.

Airbnb spokesman Alex Dagg said while the tourism industry has been impacted by the COVID-19 pandemic, Airbnb has not seen “a material change on our platform in Canada,” adding 92% of hosts around the world, according to a recent survey, responded that they plan to host as often as before, or more often, once the pandemic is over.

“Now that many Canadian provinces have lifted their restrictions on short-term rentals, we are working collaboratively with governments across Canada to ensure a safe and responsible return to travel in Canada and everywhere we operate,” said Dagg.

“In fact, Airbnb is starting to notice a boost in local travel on its platform globally and the platform’s internal data is revealing early signs of future trip planning with a focus on nearby trips.”

Real estate research firm Urbanation told CBC last month that the number of new leases signed in the latter half of June was down 27% compared to the same time last year. In May, new rental lease signings were down 41% in May year-over-year.

“If you have the ability to move, it’s a good time,” Urbanation’s director of market research Pauline Lierman told the media outlet. “You might have some choice out there coming onto the market.”

Lierman said the shift in the rental market is unprecendented and could continue into 2021 as 20,000 newly-constructed units come online by the end of the year.

Web developer Jaco Joubert has studied the effects of Airbnb on condo rentals by taking pictures of 15 downtown condo towers at night over a year to check whether the lights were on as a way to determine whether they were occupied.

Before COVID-19, he calculated that 5.6% were empty and at the start of the pandemic. That number more than doubled to as high as 13% in some buildings.

He used the Ice Condos — at 12 and 14 York St. — as a measure, given those addresses are well known for short-term Airbnb rentals.

“It’s almost double. Those buildings, since the Airbnb market has collapsed, have exploded with rentals,” he said.

A one-bedroom apartment that went for $2,000 could now go for $1,800 a month in rent, he said. Less, he wagers, if renters come in with a low-ball offer to a landlord who is anxious to recoup lost income.

The Advocacy Centre for Tenants Ontario said while prices may have dropped a little, most units remain out of affordability of the average renter who can only pay roughly $1,200 a month for a one-bedroom apartment.