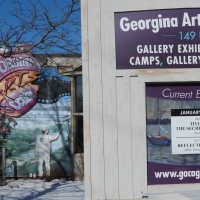 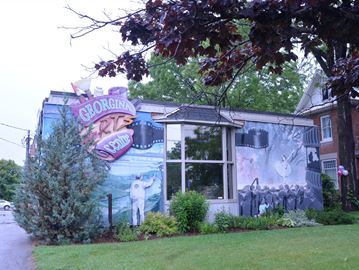 File photo
Several Georgina Arts Centre & Gallery board members will be resigning at the end of the month.
Georgina Advocate
By Heidi Riedner

Negotiations between Georgina’s Arts Centre & Gallery (GACAG) and the town regarding various operating agreements have been stalled after the art centre’s board served noticed July 19 that all but one of its directors would resign at the end of the month.

Board members Doris Keppler, John McLean, Barbara Rogers, Amanda Miller and Michelle Vacca will resign effective July 29, according to an open letter to the public, GAC membership, the town’s director of leisure service, mayor and council.

“In the interim, no further negotiations with Town of Georgina or any other organization will occur,” the letter concludes.

The move comes on the heels of a gallery membership meeting held July 15 where most of the roughly 50 members in attendance voted in agreement with a motion put forward to conduct a members meeting within the next three weeks with the sole purpose of electing a new board of directors after a number of “points of concern” were raised.

Those surrounded the financial viability and governance of the gallery, according to some members present, including the cancellation of a number of popular and profitable series, musical events, classes and camps, as well as the lack of significant fundraising activities or grants to make up projected deficits.

At issue was also a significant six-figure endowment from former Georgina resident Marnie Walker to the gallery for potential renovation of the High Street building it currently occupies, as well as millions of dollars in donated artwork.

Walker, who was at the July 15 meeting, said she would only move forward when she felt comfortable with the financial viability of the gallery and when she felt assured that governance is being properly observed in light of what appeared to be an overlap between board and staff functions, as well as matters such as minimal outreach programs and the fact that there was no gallery curator.

“I’m sorry, that scares me,” she told the crowd, adding she has run a successful business for years and worked on a number of projects and is, therefore, well versed in capital, operating, procedural and policy requirements to ensure financially viable and sustainable ventures.

The board’s official statement on the matter did not address specific concerns raised over the potential endowment to the gallery.

It did, however, state that the board reviewed the GACAG’s budget and cut back any and all additional expenses beyond key core services, thereby reducing the budget shortfall from an anticipated $66,000 approved loan to $50,000 currently drawn, as well as cut back staff hours to ensure financial sustainability to year-end.

Attempts to garner additional funding from the town, Ontario Arts Council and Ontario Trillium Foundation in addition to two local fundraising activities that did not produce the expected results were also cited.

Stating that it would have preferred any “handover of authority” occur at the board’s annual general meeting scheduled for September, the board tendered its resignation instead “to avoid further chaos potentially damaging to the GAC” as a result of the non-confidence vote at the public meeting July 15.

To the Public at large, To the GAC Membership To the Director of Leisure Service To The Mayor and Council of the Town of Georgina

In the Spring of 2015 the current GAC Board joined together with the shared vision of ensuring the Town's recognition of the GAC as their Service Provider of Arts and Cultural Programming, furthermore that the Town recognizes the asset it owns in 149 High St the 1967 Legacy Library. Faced with a failing facility, an anticipated $66,000 deficit and no legal agreements with the Town of Georgina in place to ensure their recognition the GAC was facing realistic potential dissolution at any time.

Over the past year the Board has been diligently negotiating on behalf of the GAC with the Town. We have:

1. Secured a loan which met the anticipated 2015 deficit, 2. Reviewed budget and cutback any and all additional expenses beyond key core services, reducing budget shortfall from an anticipated $66,000 approved loan to $50,000 currently drawn 3. Through the Town, replaced the roof and completed the required upgrades from the Fire Department to ensure operation, 4. With the Town, prepared 4 Agreements: Service, Licensing, Municipal Facility and Loan (approved by Council but yet to be executed) 5. With the staff created a 5 Year Business Plan 6. Approved a budget at the end of 2015 (as past boards had) which was reliant on us achieving additional grant dollars 7. Forced to cutback staff hours to ensure financial sustainability to year-end.

The Board having exhausted additional avenues of funding;

1. Appealed for an increased grant from the Town in October at Budget time and again every time we were before Council, 2. Have applied for additional funding through the Ontario Arts Council and 2 OTF grants mentioned above.

membership however the ticket sales for the Art is not being supported by the membership and the community and the campaign must be extended as a result.

The Board still strongly believes that these agreements with the Town are and were the key to the long-term future of the GAC as they will recognize the importance of the organization in the Community and ensure a 10 year commitment at 149 High Street.

The membership present on Friday July 15th, 2016 passed a non-confidence vote and have demanded that the Board step down citing "inappropriate and unethical representation" on the Board's behalf to the Town and further that the Board "has been brainwashed" by the Town to take any further steps prior to a new Board being constituted

We, the Board, now have an inability subject to the ad hoc July 15/16 of concerned "members" to enter into any agreements with the Town on behalf of the GAC since they have claim that the Board do not appear to represent the voice of our membership. We the Board do not feel this would be in the best interest of the GAC based on the status of negotiations with the Town and the GAC's current financial situation.

All negotiations with the Town over the past year have been open and transparent. We have publicly negotiated these agreements through Council and all information has been available to our membership or through Council published Agendas. Our memberships objection at this time was completely unexpected and factually incorrect.

Due to these unforeseen circumstances, we the Board, would like to apologize to Mayor and Council, as we were of the belief that we represented the voice of the membership and they shared the vision. The accusation leveled at the Board at the membership meeting July 15/16 were statements either out of context, baseless, misleading, or offered for review without all necessary information presented to those present.

We as a Board have negotiated in good faith and are confident in the transparency of our actions over the last year. As a Board, we have worked diligently to ensure the future of this organization through the support of the Town. This would equate to a commitment equivalent to over $130,000 dollars a year for the next ten years, with the annual opportunity at budget time to request additional funding if a need can be successfully demonstrated to Council.

The Board believes that the Town's expectation to establish these agreements is both reasonable and diligent for both parties. The Town is reasonably requesting that we illustrate our sustainability as would be the requirement of any major donor. So far not having been successful with additional funding the GAC is facing a potential deficit again this year and staff hour cutbacks have been the last resort available to the Board. As was explained to the GAC staff this would be an interim measure until additional funds became available. The agreements with the Town provide the GAC with long-term sustainability and many new opportunities as a recognized Service Provider officially supported by the Town for the next ten years.

The current Board would have preferred any handover of authority occur at our AGM in September, however this group of individuals have successfully maneuvered a non-confidence vote at the public meeting July 15th 2016. To avoid further chaos potentially damaging to the GAC a majority of the Board Members have decided to submit our formal resignations effective immediately and clear the way for membership to elect a new Governing Board.

This will serve as Formal Notice that the current following Board members Doris Keppler, John McLean, Barbara Rogers, Amanda Miller, and Michelle Vacca, will here by and here resign effective July 29th, 2016. In the interim no further negotiations with Town of Georgina or any other organization will occur.