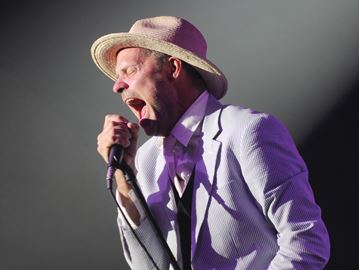 Georgina fans of the Tragically Hip will be able to see the band’s much-touted final Man Machine Poem tour concert on the big screen at The ROC Aug. 20.

Georgina is one of many municipalities to host a live streaming of the CBC’s broadcast of the band’s Kingston show capping off its tour, which came on the heels of the announcement that Hip lead singer Gord Downie has incurable brain cancer.

The live streaming event is an excellent opportunity to bring the community together, said the town’s communications manager Ken Turriff.

The Town’s recreation and culture department special events team was looking for another evening event similar to a movie night to be held at The ROC when the opportunity presented itself, said Turriff, adding the concert is also an opportunity to not only celebrate an iconic Canadian rock band, but for Georgina residents to take part in a national event as well.

The cost to the Georgina taxpayer to run the event is just over $4,000.

A couple of members of council had independently approached staff to investigate the possibility of the town hosting the broadcast event, he added.

While a CBC spokesperson for The Hip concert said the broadcaster has gotten numerous requests from cities and venues across Canada, some — like Hamilton and Whitchurch-Stouffville — have balked at using taxpayer money to livestream the final concert.

Some Whitchurch-Stouffville councillors debated a $15,000 price tag for a town-hosted event, as well as competing with local businesses who may be showing the concert and taking any potential profits from them at taxpayer expense.

Offsetting expenses through sponsorship, ticket sales of any kind or third party promotion is also not permitted under the terms of the CBC’s broadcast contract.

The cost to the Georgina taxpayer to run the event is just over $4,000, which includes video screen and speaker rentals and a dedicated Bell line for the broadcast, according to Turriff, who added the funds will come out of the town’s operating budget.

The Kinsmen Club of Georgina will be hosting a beer garden during the livestream at The ROC.

The Tragically Hip’s last show in Kingston begins at 8:30 p.m. ET, and will be broadcast and streamed — commercial free — on CBC Television, CBC Radio One, CBC Radio 2, cbcmusic.ca and CBC’s YouTube channels.