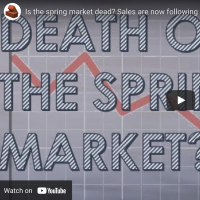 Is the spring market dead? Sales are now following prices DOWN!

The growth in house prices during March 2022 remained robust, although the rate of change has declined substantially from February. Month-over-month price gains slowed from 5.3% last month to 2.2% this month.

The apartment category is still pretty strong. Second-highest ever m-o-m change. Daniel believes this is driven by two factors - the reopening of dense urban centers and the pivot to entry-level condos that may be more attainable than single-family homes.

Peterborough and Kawartha saw the biggest price bump this month (up 7.5%) followed closely by Halifax Dartmouth (up 7.4%). All cities that saw price growth above 5% had average prices around $500k, which could indicate that the hunt for affordability is driving growth in these regions. Only six cities saw prices decline.

Saskatchewan was particularly interesting as home prices here have been rangebound for an extended period while the prospect of a global food crisis and fertilizer shortage could bolster its economy.

Finally, Vancouver’s single-family homes are now much more expensive than their 2018 peak. In fact, even the Prime Minister (who earns $360,000) can barely afford the average single-family home (which costs $2.1 million) here.