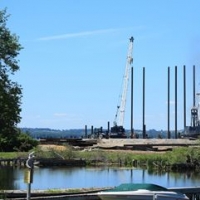 The South Shore waterfront condo development in Keswick formerly billed as Crate’s Landing finally broke ground this month, eyeing a 2018 occupancy, according to its developer. “It seemed to take forever but we are finally going big guns and can estimate a true closing date,” Nick Circosta, vice-president development and special projects for Fortress Real Developments, said now that the site prep work has been completed and the foundation is finally going in for an impressive waterfront development on the shores of Lake Simcoe. The Grandview Marina and Harbourview Villas condo units featuring a variety of one-, two- and three-bedroom units ranging up to 1,400 square feet, as well as a public boardwalk, comprise phase one of the project. Circosta frankly admitted one major hurdle to overcome in the overall project’s stalled history, which dates back to 2011 when the original plans first tabled, was the former name of the project after the neighbouring Crate Marine went into receivership and eventual bankruptcy. The name change in July of last year was necessary to differentiate and disassociate the development project from the financial difficulties facing the Keswick marina to avoid any confusion in the public, he added.  That may have helped since what is being billed as a master planned community on Lake Simcoe offering luxury living in the heart of nature sits at about 60 per cent in pre-sales without a major marketing launch to date and is finally under construction with steel piles going in on the eight-acre waterfront site on Cameron Crescent just south of the Maskinonge River in Keswick. With Fortress at the helm, all the significant planning approvals and permits for the project, as we’ll as requirements under the Lake Simcoe Region Conservation Authority, were put into place. Foundation preparation and review of construction contract bids were also completed. The only outstanding matter in terms of planning approvals is signing a final site plan agreement but Circosta doesn’t anticipate any problems there, adding the town has worked with the developers to work through any and all requirements. “We’ve done a lot and are excited to finally make a significant move forward,” Circosta said, adding the project, which includes plans for a hotel, restaurant, bar and public boat slips under its proposed second phase, is “unique” even by industry standards for a development company with over $4 billion of development projects spread across four provinces under its belt. “This is a big site and not your normal project,” Circosta said, referring to not only the significant amount of excavation and shoreline work to prepare the site to date, but also being one of only a handful of true waterfront — not water view — projects.  “Your typical build is 26-storeys on a 200-foot lot in Toronto or Regina. This is a different, and highly unique, project; one of only a few with true waterfront,” he added. According to plans for the project, future condo residents will enjoy all the hallmarks of resort-style living including a sandy private beach, lap pool, infinity whirlpool with cozy community lounge and fire pit, deck, luxurious lobby, state-of-the-art fitness facilities and five acres of protected bird and nature land complete with nature observation. The master plan for the site, if approved, provides for ample public access via the boardwalk to portions of the property, public boat slips and available amenities stemming from the hotel. Despite skyrocketing real estate prices, Circosta confirmed there may still be a few units available at last year’s starting prices in the neighbourhood of $400,000 for the 91-unit Grandview unit. Reservations are also being taken for the proposed 60-unit Harbourview, which won’t, however, be going on the market until about six months from now. “We are getting good response and there is tremendous satisfaction and pride in getting this project finally built,” Circosta said.