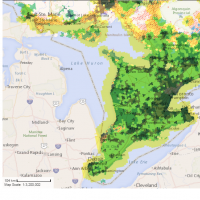 Long-distance calling costs once played a role in purchase decisions.

A few days ago, I was preparing a bit of a commentary on Rogers’ introduction of unlimited data. I was trying to conclude how unlimited data may play a role in making rural living a little bit more attractive. As an example, I can now stream Netflix at the cottage in Dwight, where Season 3 of Stranger Things would’ve previously cost me $250.

Completely independent of my thought-gathering mission on the aforementioned topic, I had this interesting discussion that flooded my eyes with the light it shed on the topic. This whole thing felt kind of timely, and gave me the exact anchor I needed to consolidate my thoughts here.

Wireless technology can cause material change to the way we use real estate. In fact, it has before.

But first, some context.

I had a buyer come through an open house yesterday who mentioned that about a decade ago, she left the sleepy town of Pefferlaw, Ontario to move closer to Newmarket because they were spending $2,000+/month in long-distance calling costs running their legal business from home.

Being 28, I was massively ignorant to the cost of long-distance calling. the only time it’d ever played a role in my life was when I spent hours on a phone call with a significant other who was travelling to Italy and had to reimburse for a rather large bill.

Before just adding this to the list of now-obsolete material factors in the property decision making process, I thought I’d meditate on it a little bit, especially because it’s easy to unpack linguistically (long distance), and economically.

A decade ago, an extra $2,000/month would allow you to afford mortgage payments on the average Canadian home. Today, things are a bit different, and with the cost-differential (read disparity) between urban and rural areas growing, you really start to see the gears turning in purchasers when they’re evaluating the list of compromises they’re willing to make to purchase.

If I’m creating a hypothesis here:

This will likely start small, but as widespread adoption of unlimited data happens, the changes will become the new norm. This may come as a surprise to some of you, but:  there are people who want to live outside of urban areas.

This may also come as a surprise to you: some of those people also want to work from home. Connect the dots here, and you’ve got the start of what could become a pretty consistent and predictable theme among the real estate demand pool. This becomes especially true if millennials who start having families decide to move outside of the city with said families, just like their boomer parents did.

Nevermind, millennials never do anything their boomer parents did, right?

On the drive home from the open house, I wondered to myself, what’s the modern-day equivalent to this long-distance calling phenomena? I wanted to jump to the lowest-hanging fruit here would be commuting in nearly-doubled congestion, but I thought of a few different factors that could play a role in the purchase decision as they become a more variable cost the further you move away from an urban core. These two, especially, are directly comparable in the way they effect both life and work outside the core:

With telecommuting and remote work popularizing, the unfortunate reality is you can really only go so far away from a major urban area before you start feeling the effects of poor-quality rural technology infrastructure. Compound that with the fact that the majority of our social interaction, media consumption, and television rely on the internet, and you’ve got reason enough for someone not to want to live in a rural area if they can afford not to.

In the graphic above, basically, you were originally worse-off in a yellow area (LTE) than a light-green (fixed wireless) area. Now, your speed may be a little worse, but your cost is immensely improved. For those of us just sending e-mails and small packets all day, this is literally the modern equivalent of erasing long-distance calling fees.

Things are going to change!

Here are some of the externalities I anticipate as we begin a more widespread adoption of unlimited data in Canada:

Final note – I’ve always been a critic of the York Region Broadband strategy, for the sheer fact that it’ll likely be functionally obsolete by the time it’s completed. (I feel the same way about the BRT line, but at least automated vehicles can use those lanes someday). I do feel excited by what will likely expedite the process of proving whether or not I’m correct.

My new curiosity here is figuring out a way to quantify how this is going to change things. Looking for long-distance revenue datasets against the onset of unlimited long-distance calling.