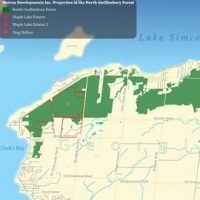 Saving Georgina’s protected wetlands from development is back on the public radar after the latest appeal from the North Gwillimbury Forest Alliance.

It urged the public in an online appeal to contact members of York Region council asking them to prohibit development on the Paradise Beach-Island Grove provincially significant wetland in the North Gwillimbury Forest when they review the town’s recently passed official plan (OP).

The alliance says the town’s OP is “flawed”, and leaves the door wide open to the paving over of significant wetlands on the Maple Lake Estates (MLE) property in the north end of Keswick.

“Fixing that flaw,” in the alliance’s opinion, is now in the hands of York Region council, which must approve or amend the town’s OP after a review of Georgina’s land use planning document.

“Obviously, approving a plan that gives more weight to three-decade-old planning approvals than to current provincial law and policy is a bad idea. We’re hoping a majority of York Region councillors will understand — and act on — their legal obligation to protect provincially significant wetlands,” the appeal urges.

The alliance and its supporters say allowing the development of a large mobile home park in the heart of one of the 10 largest remaining forests in the Lake Simcoe watershed would divide it in two and deal a huge blow to the already fragile Lake Simcoe ecosystem.

Alliance chairperson Jack Gibbons has repeatedly criticized the town for not prohibiting the development that would see DG Group’s development approvals for 1,073 mobile homes on leased lots in the forest exchanged for equivalent approvals on other lands that it owns south of the forest.

Furthermore, he says the town drew up its official plan based on the “erroneous belief” that it was going to be able to arrange a land swap involving a parcel of prime agricultural land located within the Greenbelt.

“It was a bad bet, as the provincial government has now nixed that idea in its Greenbelt review,” he said.

Council, with the exception of Councillor Dave Neeson, supported staff’s analysis that the MLE lands were basically exempt from all wetland policies because the province’s Greenbelt Plan recognized the development.

And, because upper-tier plans take precedence when policies conflict, the Greenbelt Plan and the region’s official plan would have to be amended to prohibit the development, says the town.

According to the alliance, the real solution is to bring the town’s OP into full compliance with provincial policies.