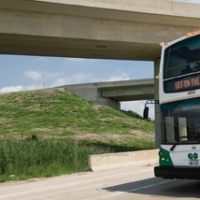 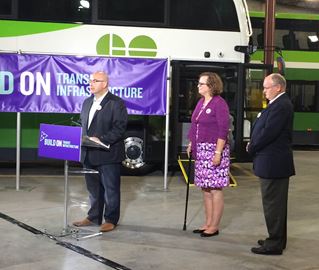 It appears the province of Ontario is doubling down on the double-deckers.

These new 81-passenger buses will be able to access four major bus terminals - Hamilton, Yorkdale, York Mills and Union Station, which are not serviced by the current double-decker fleet due to height restraints.

"The new accessible, low-floor, low-height GO Transit double-decker buses will make it easier for customers with limited mobility to board and make access to transit faster and more convenient,” said transportation minister Steven Del Duca. “Our government is building a modern and integrated transit network in the region to seamlessly connect communities and businesses."

Today’s announcement was held at Alexander Dennis Ltd. in the Langstaff and Creditstone roads area in Vaughan.

Alexander Dennis Ltd., a bus and coach manufacturer that opened earlier this year, will be responsible for building chassis, installing engines, axles and steering components and conducting inspections for the new Metrolinx fleet.

More than 250 new buses are to be delivered and will be put into service over the next four years costing Metrolinx more than $250 million.

There is an option to add 150 more buses bringing the total public transit investment up to about $495 million.

The new buses feature lower floors with a longer, more gradual entrance ramps and wider areas for transit riders with wheeled mobility devices such as wheelchairs, walkers and scooters to maneuver.

The buses are also equipped with automated next-stop announcements and display technology.

"In Ontario, accessible public transit is not just a priority, it is the law,” said Tracy MacCharles, the minister responsible for accessibility. “These new double-decker buses will keep people moving and ensure that transportation is integrated and accessible to people of all abilities, now and into the future."

In more than a decade, the province has added about 90 kilometres to GO’s rail network, opened 14 new stations, rebuilt four stations and added more than 31,000 parking spaces.