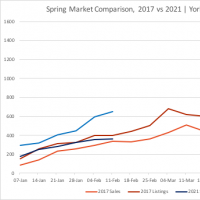 I’ve heard a lot of anecdotal comparison alluding to 2021’s similarity to 2017. While I do feel the same phenomena in consumer sentiment that many are describing, I felt compelled to see whether or not we could learn something from the data between these two points in time.

On the qualitative side, I’ve heard reports of, or personally seen the following sentiment among buyers in 2021 that feel similar to 2017:

The way that I typically advise buyers to deal with this type of risk is by acknowledging, accepting, and managing downside risk, understanding opportunity, and thinking about the long-term outlook of their housing investment. An important part of doing that advisory job is analysis, in such that my clients depend on me to illustrate that risk so we can work around it.

On the sale side, we are just beginning to see the opportunistic selling trend we saw in February-April 2017, which I feel is a healthy thing, and could ultimately be our saving grace. When we analyze the supply and demand of 2017 against 2021, there is was enough cause for concern in the uniformity in January of each respective year. Supply was about as equally tight in January 2021 as it was in 2017. As real estate price inflation perpetuated into February, a divergence between supply and demand began, and based on what I’m seeing in the market qualitatively, it is a divergence I expect to continue.

Does this mean prices will stabilize or come down? Perhaps a little bit, relatively. Does it mean the broad market will correct massively? No.

From what I can see, the only market that appears destined for sustained insanity is Barrie, and most of Simcoe County. There’s a good chance this could be a result of my incomplete data. I get my data from Toronto Regional Real Estate Board, which doesn’t fully capture Simcoe’s market.

The chart above analyzes how much exposure the insured-mortgage environment likely has by dividing 2017 & 2021 into above $1,000,000 value (uninsured) and below $1,000,000 (insured). Here is a line graph of the same data below - the markets are functionally similar... not that it matters - but I built this chart to see if there was more activity in insured mortgages, because it felt like there was. My presumption proved to be pretty wrong:

Before we get really deep into the similarities between 2017 and 2021, let’s examine the differences… hop in the time machine with me:

Most people would argue that 2017’s “crash” was brought on by an exogenous threat: the Non-Resident Speculation Tax (NRST). The map shows the areas impacted by NRST. Instituted by the provincial government, this policy effectively reduced the buying power of foreign investors by 15% during a time they were incredibly active. It seemed to simply port that foreign capital demand into markets outside of the NRST, and that growth is now being compounded by the exodus phenomena. On the same token, it could be argued that most of the excess domestic demand was caused by the exogenous national policy environment and macroeconomic factors. The most often used examples of this would be record-low interest rates, general immigration capital policy, and Vancouver’s 2016 Foreign Real Estate Investment tax pushing foreign capital demand into Toronto’s market.

I would personally argue that B20 (the “stress test” policy) had just as much of an impact on the market slowdown in 2017, and I also feel that we also saw record opportunistic supply prior to the introduction of the NRST, which is something that very few people speak about. I do agree the NRST was certainly the “final nail” in the coffin of 2017’s wildly inflated market. I decided to quantify this supply and demand phenomena while I began comparing the supply and demand of 2017 vs 2020 for two key markets – York Region, and Durham Region:

Today, things are much different. We’re looking at a much more microeconomic story when compared against 2017, in such that foreign capital hasn’t been playing as much of a noticeable role in the changing property demand patterns in the GTA. We initially saw a bit of a capital exodus away from core density product during the primary covid-19 lockdown, as well as some pretty frothy activity in cottage country. Naturally, the demand settled in the middle – a rapidly inflationary suburbia and a slow-growth urban core.

The growth that we’re seeing in 2021 is different because it’s an economic externality, not the result of an exogenous activity. While some would argue that covid-19 was the exogenous threat that should have settled Canada’s seemingly runaway housing market, it did the exact opposite.

There are a handful of factors whose externalities have culminated to create my current perspective on the GTA:

Monetary policy and central banks rushed to flood the market with liquidity in hopes of preventing a massively recessionary environment, and it worked. As a result, Canada’s housing market continued to grow, in spite of a 75% drop in immigration in 2020. If anything, immigration is negatively impacting the market, while monetary policy is propping it up.

As such, I don’t think there is a “policy-driven” final nail in the coffin for 2021 like 2017. If there were to be a final nail in the coffin for 2021, it would be a massive pullback in the global economy realized in the stock market indexes. Many are saying it seems it seems inevitable, but I honestly don’t know given how much liquidity is in the market.

We have a much more regulated market than we did in 2017, so if anything we will see policy go in the opposite direction. I could see a future in which policy is gradually unwound to stimulate the market, especially given the Bank of Canada’s commitment to protecting homeowner equity, although it doesn’t seem like they’re committed to protecting future homeowners. Prior to covid-19’s arrival, B20 was scheduled to be reduced or removed – a decision that was postponed in April of 2020.

So, in general, I think we’re much more likely to find a healthy equilibrium in 2021 than we were in 2017. I believe that if we do see a correction in housing prices in the GTA, it is more likely to be a delayed one, and it would happen on a much longer timeline than the 2017 crash. This type of correction could be brought on by a weak economy and job market, sustained challenges meeting immigration targets, or a sustained recessionary period. The Bank of Canada seems fairly committed to making sure this doesn’t happen, but at the end of the day, only time will answer that question for us.

If things sustain, there’s a fairly good chance I have sold the last GTA detached home I’ll ever sell to a first-time homebuyer in January 2020. This is why I’m working together with Amanda Marino on a first-time investment series, aptly named “The First Time”, to help aspiring real estate investors explore more accessible opportunities outside of markets they’re familiar with.

If you're interested in checking out this podcast, it can be found here: https://anchor.fm/brickandmortar

But what about Condos?

The only remaining trend I believe to be worth noting is that condos are now back on the price floor. I’ve decided I’m going to write an entire new article about this next week, because I think this presents a pretty symmetrical risk-to-opportunity scenario, and I’m interested in really analyzing and understanding how the urban areas are going to change as we return to the “new normal” we’ve all been hearing about.

I'm also going to expand last week's article, Drive 'til you quantify: Yield-hunting in Ontario, to provide my general thoughts on how we may be heading toward a more European-style housing model because young people can no longer afford to own their primary residences. While urban rental is more compelling than it's ever been, this could lead us to an equilibrium where we have high institutional urban ownership and decreasing home-ownership rates, and increasing multigenerational household ownership (which could remain as the only option for the principal residence). If this is the case, realtors will suffer, and Twitter will finally be happy. (go look at the amount of transaction in European markets of this type)