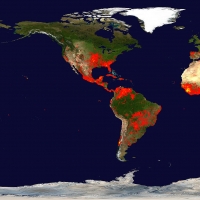 The burning Amazon, and real estate as an information system

Real estate is a technology.

I've had this idea marinating in my head for a little while that is sort of an expansion of the concept I've already communicated I believe in: real estate is a technology. Land is the surface of a floating rock in space we're lucky enough to exist upon. It is a piece of the universe. Real estate, then, is an expansion upon it. Through this system, we interact with the world, and with one another. Real estate is a collection of technologies ranging from zoning and tenure structure to the supply and demand forces of each and every consumer and stakeholder who interacts with it. If I unpack the latter concept within that spectrum, the idea of supply and demand forces, a new picture becomes clearer to me:

Real estate is an information system.

Evaluating these concepts can deliver you a lot of really important information about the way that the world works. There are a couple of concepts that describe this phenomena far better than I can:

"How Buildings Learn is a masterful new synthesis that proposes that buildings adapt best when constantly refined and reshaped by their occupants, and that architects can mature from being artists of space to becoming artists of time." You can also watch the BBC series on YouTube here:

Desire Paths: is a path created as a consequence of erosion caused by human or animal foot-fall traffic. The path usually represents the shortest or most easily navigated route between an origin and destination. Width and erosion severity can be indicators of how much traffic a path receives. Desire paths emerge as shortcuts where constructed ways take a circuitous route, have gaps, or are non-existent.

What real estate can tell us

I absorb a lot of the content that comes out of esoterica and academia, and the lack of dialogue about the impact of real estate on these discussions is astounding to me. This is an extremely important discussion to have.

The utility of real estate communicates things about our society to us. There is literally intimate and instantaneous feedback system sitting in front of us at all times, and it seems as though it’s being ignored. There is no problem that I can think of that doesn’t, in some way, involve the physical world.

There are some major global issues that could’ve easily been avoided, or at least predicted, by proper understanding and evaluation of patterns in human interaction with real estate.

Income disparity can be attributed to, and further exacerbated by, urban economic factors such as resource, climate and populous.

The burning amazon is largely attributed to deforestation for agriculture, and regardless of your moral stance on the matter, the fact that this happened is the world communicating something. The part I find important is that it’s communicating it through itself, its physical self, and that seems to be the only point in which people start to listen.

Homelessness is a real estate story.

Superbugs are a real estate story.

Each and every one of these issues has an element of the physical world within it, and it’s important that we have the resources to explore it more thoroughly through that lens. We have one of the most important tools to help us diagnose and repair a lot of these problems and it’s not being treated as such.

We tell a story with the way we interact with the world. We communicate some of the most subconscious and animalistic of our desires through our physical activity, and there are important data to be extracted here. I’m not talking about real estate technology, smart homes, or surveillance.