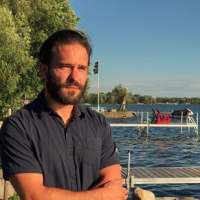 Businesses, residents and councillors speak out against how crowded Keswick becoming on weekends

“There’s lots of reports of people trespassing,” he said. “Some people have been going and having picnics on people’s docks. Some of it is confusion. I don’t like to be prejudiced (against city people), but I think local people are familiar with the rules."

It’s not just trespassing on resident’s docks he’s been hearing about and witnessing.

Foch has also seen many of Keswick’s private beaches, the upkeep for which is paid by the member homes in the area, becoming full, likely with non-residents, on many days. And people disregarding orange snow fencing to sunbathe and swim.

“This is a new challenge that’s been presented to municipalities,” said the Keswick resident. “People can’t leave (Canada) so they’re gravitating toward the lake.”

Foch, who says those seeking properties in Keswick are increasingly putting a premium on lakefront properties and those with private beach access, has been witnessing more “no trespassing” signs popping up along Lake Drive North.