Up the Maskinonge event in Georgina floats stewardship results 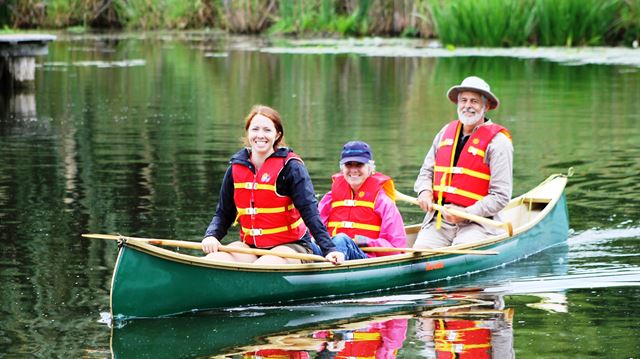 About 40 people hit the water in a dragon boat, canoes and kayaks to tour restoration projects along the shoreline of the Maskinonge River in Keswick during the annual Up the Maskinonge with a Paddle event Sept. 10.

That’s a welcome sign and good news to Mei Lan Shepherd, who participated in the event as part of the Georgina Dragon Boat Club.

“A few years ago there was so much duckweed in the river that you could hardly paddle through it,” she said.

“It’s obvious to us that restoration work is making a big difference in the health of the river.”

Multiple sightings of the great blue heron and a quick peek at the elusive black-crowned night heron punctuated that fact, according to Ballagh.

She added residents interested in restoring and protecting the Maskinonge River may qualify for funding grants through the LSRCA.

Funding is available until March 31, 2017 for projects such as planting native buffers, planting trees and shrubs, and enhancing wildlife habitat.

MRRP is a community-led initiative aimed at improving the water quality and wildlife habitat in the Maskinonge River subwatershed, in partnership with local landowners.

Various activities to date include shoreline restoration, wildlife habitat improvement and public awareness initiatives since the MRRP’s inception in 2008.
For example, more than 3,000 trees and shrubs have been planted along the riverbanks in riparian areas on 28 different sites; 462 metres along 13 properties with eroding shoreline have been replaced with rock/shrub banks; and three in-stream riffles have been created for fish and wildlife habitat improvement.

The Maskinonge River lies within a subwatershed entirely in York Region, with most of its 90 kilometres in length, including tributaries, falling within Georgina and East Gwillimbury.