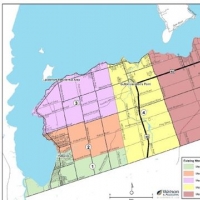 Redrawing Georgina’s political boundaries from the existing five-ward voting system to “more fair” representation for Keswick could be the result of a current ward review.

Seven members, including the mayor and one regional councillor elected at large and five councillors elected in five wards, currently comprise Georgina council.

Preliminary results of an in-depth study by consultant Watson & Associates presented to council and at a public information session earlier this month floated four options, from realigning boundary lines in existing wards to additional wards being created to more appropriately reflect population disparities.

“Growth within the town has created significant inequalities in ward-to-ward populations, which is expected to be exacerbated through the ongoing development planned in Keswick,” noted the report.

Population growth during the past two decades since the last ward review in 1996 has been concentrated along the shoreline communities and particularly in Keswick.

More than half (54%) of Georgina’s existing population (representing a population of 28,940) resides within Keswick, according to a population and housing forecast for the period between 2016 and 2012.

By 2022, Georgina’s population is expected to increase by 7%, reaching approximately 57,325, but it will be concentrated primarily in the southern portion of Keswick (specifically in Ward 1) with some growth in Sutton (Ward 4).

The net result is that by the year 2022, three of the five wards are expected to be outside of what consultants call an “acceptable range of variation” when it comes to representation that is equitable (that is, fair) when it cannot be mathematically equal.

“The option of leaving representation ‘as is’ would not, in our view, be appropriate,” the consultant’s preliminary report states.

In addition, the “balance” established after the 1996 review between lakefront, urban and rural components in each ward has “disappeared”, according to the in-depth review.

The proportion of permanent and seasonal residents (overwhelmingly from lakefront neighbourhoods) varies considerably from ward to ward.

Seasonal residents constitute only about 3% of the total population of Wards 1 and 2, but approximately one-quarter of the population of the current Wards 3 and 5.

“The idea that there is a ‘balanced’ distribution of permanent and seasonal residents across each of the wards in Georgina is no longer plausible,” the report states.