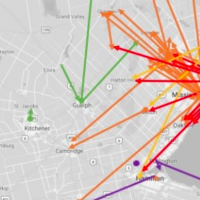 What is the urban exodus, and why does it matter?

I wrote a lot of articles earlier this year, but started doing more visual analysis for Instagram, Twitter & YouTube to grow my audience on those platforms. I've decided I should write a bit more again.

I managed to put together a few data sets aimed at understanding the way people are changing their relationship with urbanized housing as a result of the covid-19 pandemic, and the consequential lockdowns that followed it. The information was well received by the media. Naturally, the analysis is focused on housing, because, as a TRREB member, housing data was the easiest for me to find.

If you'd like to read more unpacking of my data, I'm fortunate enough to have been included in some work by these journalists:

I've wanted to write this short article for a while, but it's taken me some time to gather my thoughts on the topic. I think I've finally wrapped my head around the value I have to add to the discussion.

Heading into the 2nd lockdown with a vaccine on the horizon, here's what I discovered regarding whether or not we're seeing an urban exodus in the Greater Toronto Area:

Who is buying suburban real estate in 2020

"Life is what happens while you're busy making other plans." - A. Saunders

From my perspective, purchases in 2020 are driven by one major market trend: the advancement of plans. All at once, we realized that life is not going to wait for us, and investments are no different. Anecdotally, two large groups of end-users have indicated changes in behaviour purchasing in this trend. They are, co-incidentally, also the two largest demographics in the Canadian population curve:

I'm going to write a lot more about these changes in consumer sentiment, because I'm especially interested in understanding how the current supply pipeline is able to meet these demands. By its very nature, real estate has an incredibly long supply-chain... it takes a lot of time. Decision-making requires years of foresight, which we couldn't really have for a year like 2020. I would argue that the current suburban development landscape is more tailored toward those seeking large family homes than downsizing options, and I think this is a trend that could change if we see a sustained shift in this consumer sentiment. Essentially, I would imagine that suburban infill, secondary plan development, and suburban land assembly will become more important within the next 5-years.

Interestingly, the urban supply pipeline is mostly filled by small units, which are in a declining-demand environment (for now). The long-run nature of real estate development is not agile enough to adapt to market demands that could be permanently changed by the global pandemic. Time will tell if this presents long-term challenges for urban product. At the same time,

We always knew (or should have) that winter was going to bring our hardest fight against covid. I always had the parallel hypothesis that winter would be the toughest time for urban housing product as well. We're already seeing an upward trend in new rental listings, and we're heading into a lockdown that encapsulates the slowest leasing months of the year (Dec + Jan). Prices are sliding, and they'll probably continue to do so.

The bottom will be put in pretty quickly, though. I do honestly believe that end-user opportunism will save the Toronto condo market. For those who don't have family/future reasons to exist in the suburbs, it seems urban demand is more poised toward ownership than rental (though I have seen a lot of rental opportunism).

I don't really sell condos, but I've received myriad inquiries about condos from Millennial and Gen-z friends looking to time the market, and that tells me something: there are a lot of people waiting on the sidelines. In my conversations with Jordon Scrinko from precondo.ca, I learned that sentiment is echoed in investment demand as well.

I suspect that when we emerge from this, condos may be an important part of the Canadian dream of step-up homeownership again, and they'll function as an entry-level product once more. This could happen for one of two reasons:

Nobody knows, but I feel only one scenario allows us to retain our attractive economic position for immigration in the fullness of time. We've got the fed pumping as much residential credit as humanly possible into the market, and this could be softening the blow to condos in some twisted trickle-down fashion that may be kicking the can down the road.

I've always been a little too quick to describe real estate consumers as impulsive, but they are, and there's nothing exceptionally wrong with that. The fast-paced growth of the Canadian housing market has created FOMO levels that rival even $TSLA or Bitcoin's cultish craze. The challenge here is that our migration around different housing types has been equally impulsive, with demand and volume shifts into condos driven by The Places to Grow Act's obsession with density. This trend was exacerbated when troubled "investors" met their reckoning in 2017 GTA detached product, running back to the urban area to run the same get-rich-quick-scheme on their now-beloved condos.

Now, we see a similarly credible threat to the condo market. This is the first time we've really seen a drastic change in consumer sentiment around the nature of urbanization since the Places to Grow Act promoted it. So, we discard any lesson we learned in 2017 about the short-run nature of the detached supply chain and begin treating it the same way, with a mentality of supply scarcity that constantly pushes prices up.

From my perspective, all of the information I've analyzed in 2020 tells me a few important things that I'm going to be writing about over the winter. We've reintroduced the idea of suburban living to mass consumer psychology, and that's important, even if it's short-lived, as many experts predict. I'm excited to cover this more over the coming months.