York Region's high housing prices: Are there solutions or is this the new reality? 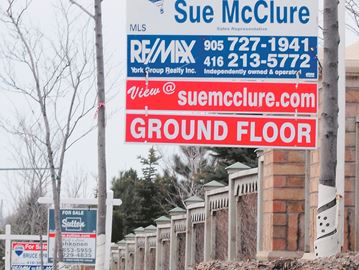 Twenty-four-year-old Nick DeRyck is living in his parents’ Newmarket basement, wondering if he will ever be able to afford to buy his own home despite finishing college, being employed and saving thousands of dollars towards a downpayment.

Meredith Blunt’s family is readying to leave York Region after being outbid several times on Aurora homes despite a budget of $700,000 and an annual household income of more than $100,000.

In some communities it’s even higher. In Richmond Hill, the average price is $1.07 million and you need a yearly household income of $179,550 to get in the front door.

While soaring prices make daily headlines, measures to help reduce costs could prove too unpopular to be implemented, McKellar, director of the real estate and infrastructure program at the university’s Schulich School of Business, said.

Prices are sky high because there are so many people able to buy, whether they are investors or people who have borrowed money from parents and grandparents.

“People tend to talk about housing affordability whereas the problem might be that housing is too affordable. The minute those people withdraw from the market, the prices may go down,” he said.

“The first thing we may do is say how do we force people out of the housing market?”

Governments can force people out of the housing market through measures such as mortgage restrictions and tax policies.

“If you go to the federal government and say you should essentially have policies to drive people out of the market, they are going to say ‘Are you crazy, we want to get re-elected.’ All governments don’t want to face the problem. I know it’s perverse but it’s like anything else where people will price the market. The government isn’t setting the high price, the buyers are and until you force some of them out of the market, the prices aren’t going to come down,” McKellar said.

“We don’t have middle and upper middle class people out of housing. We have a problem that they can’t afford what they want. I’m not unsympathetic to them. I’m simply saying now that they go into the market, they find very stiff competition. The only way to reduce the price in that environment is to find some way to reduce the competition. And that is the tough one because the politicians have the means to do it but I don’t think they would have the political will to do that.”

Meanwhile, we all have to alter our perceptions of the type of housing we believe we are entitled to, said McKellar.

Meanwhile, people in Canadian urban centres may have to get used to the notion that they will have to rent for life, as many Europeans do, rather than hang on to steadfast beliefs that they will own their own home, McKellar said.

“Housing affordability is one of the most significant issues and challenges facing York Region and the residents of York Region today. It’s obviously an issue beyond the borders of York Region. I think it has always been an important issue but the recent hyper-escalation in housing prices has really brought it to the forefront in a new way,” said Taylor, a member of Housing York and co-chair of the Human Services Planning Board.

“I can’t even imagine what it must be like and how frustrating it must be to be a young couple trying to save up for a downpayment and watching housing prices increase faster than they can actually save for the downpayment. The target is moving constantly. It must be so disheartening.”

Higher levels of governments are making moves to address the issue, including the federal government’s announcements Monday that it will move to tighten mortgage rules and closing a tax loophole for foreign investors, he said.

“I think (high housing prices) is a new reality but I don’t think we just have to live with it. Steps can be taken by all levels of government and the private sector that this new reality is creating,” he said.

“You don’t give up just because it looks like there is no perfect solution.”