Pefferlaw is a community within the Town of Georgina, located 3 kilometres south of the southeastern shores of Lake Simcoe and in the eastern end of the town. A river, known officially as the Pefferlaw River, runs just south of the community's commercial district. Pefferlaw is passed on the north by Highway 48 and Lake Ridge Road (Durham Road 23) to the east, and is serviced by Pefferlaw Road which links these two traffic arteries. Area code 905 is bounded to the west, but Pefferlaw along with Virginia Beach, Udora and Port Bolster remains in the 705 area code. The Canadian National railway passes through Pefferlaw and, until the early 1990s, served a train station in the community's commercial district. This railway links Toronto with Orillia, as well as Northern Ontario with Via Rail transcontinental trains heading to Vancouver. 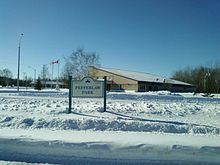 Census information is not available for Pefferlaw. It is counted as part of the Georgina Census division.

The town is largely centered around the Pefferlaw Dam, blocking the Pefferlaw River. The dam is operated by the Lake Simcoe Region Conservation Authority. Pefferlaw's commercial district lies just north of the dam, and features a supermarket, hotel, youth centre, automobile service station, Canada Post office, medical centre with pharmacy, Liquor Control Board of Ontario retail store, and a branch of the Canadian Imperial Bank of Commerce. The town features several public facilities operated by the Town of Georgina, including a public library completed in 1989, community centre, fire station, and a large multi-use park. Cedardale Church is now the only place of worship in Pefferlaw, located just north of the intersection of Morning Glory Road and Pefferlaw Road. The York Region District School Board operates Morning Glory Public School, an elementary school 5 minutes north of town on Highway 48. 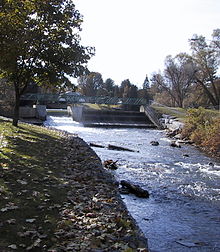 Approximate driving times to nearby communities

Pefferlaw was founded in the late 1820s by Captain William Johnson; a British Naval Officer who was released from service in 1815 following the Battle of Waterloo. The name, Pefferlaw, was suggested to Captain Johnson by his brother in remembrance of a field among the heather on their old homestead and means, “a beautiful greensward.” [1]

The first preserved diaries of William Johnson begin in 1832. By that time he had a sawmill, woolen mill and gristmill built at Pefferlaw.

The first store in the village of Pefferlaw was built in August 1833. Soon after, Robert Johnson, brother of William, took over running the store and shortly thereafter built a large two-story red brick house on the edge of the bank beside the store which still stands today. The second store in Pefferlaw was built by George Johnson, son of Captain William, this in 1856.

Banking came to Pefferlaw with the arrival of the C.N.R. Railway in 1906.

The Pefferlaw area like all early hamlets had its share of hotels – one at every crossroad. The Morning Glory Hotel was built in the 1860s and stood for many years on the site of the present day Morning Glory Public School. The tavern was well patronized by river drivers, lumber workers and stage coach passengers and drivers. The Mansion House Hotel was built in 1884. When it changed owners in 1906 the establishment was renamed, Hotel Belvedere.

Captain Johnson died in 1851 at "Oldcastle", lot 6, conc. 7, Georgina, which was always his home. He is buried there.

There are no listings matching your search!

Let's find a home, just for you. 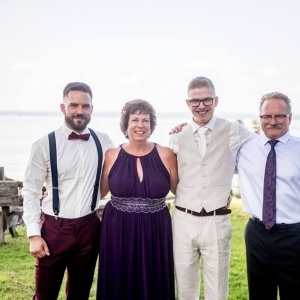